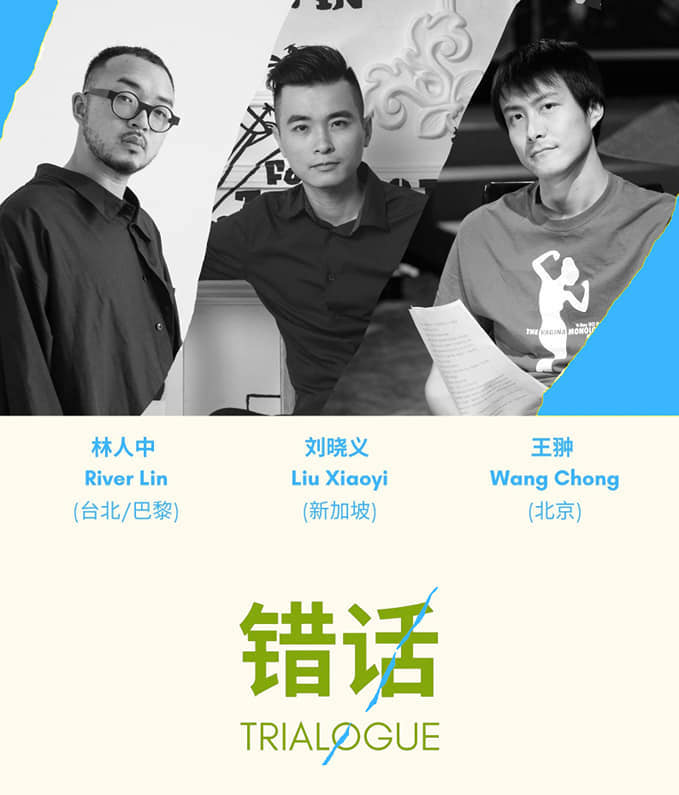 “…Trialogue, a series of online conversations initiated by director Liu Xiaoyi (Singapore) between Liu, Wang [Chong], and River Lin may suggest just that: a prelude to non-mediated trans-Chinese collaborations in a future post-COVID-19 world. At the same time, Trialogue may be seen as a digital-age revival of the seminal Chinese Drama Camps that the late Singapore theatre doyen, Kuo Pao Kun (1939–2002), convened in the 1980s, sowing the seeds of the rhizomatic kind of interculturalism that defines transnational Chinese theatres.”

Trialogue was initiated during the COVID-19 lockdown to reach out to fellow theatre practitioners across Asia without the pressure of working towards a particular outcome.

In each episode, the three speakers spoke freely and openly about pre-determined topics related to their practices- artistic vision, methodologies, building networks, censorships in their cities and so on. The series aims to develop a long-term platform for exchanges and network for future collaborations.

Working across the contexts of visual art, performance and dance, River Lin stages live works in gallery settings through situation, choreography and participation. Since 2017, he’s initiated and headed ADAM (Asia Discovers Asia Meeting for Contemporary Performance) with and presented by Taipei Performing Arts Center, to foster artistic exchanges and cross-cultural collaborations in the Asia-Pacific region.

The Artistic Director of Emergency Stairs, Xiaoyi is considered a promising figure at the forefront of the experimental theatre scene in Asia. He was the recipient of “Young Artist Award” by the National Arts Council of Singapore in 2016. Since 2011, Xiaoyi has been particularly involved in intercultural dialogue. He curated the annual Southernmost Project, which seeks to develop cultural exchange and network building across Asia.

Wang Chong is the most internationally commissioned Chinese theater director. His works have been invited to 17 countries. Wang’s productions include: The Warfare of Landmine 2.0, winning Festival/Tokyo Award; Lu Xun, noted by The Beijing News as The Best Chinese Performance of the Year; Teahouse 2.0, winning One Drama Award. Since 2016, Wang has stopped using cellphone and social networks.